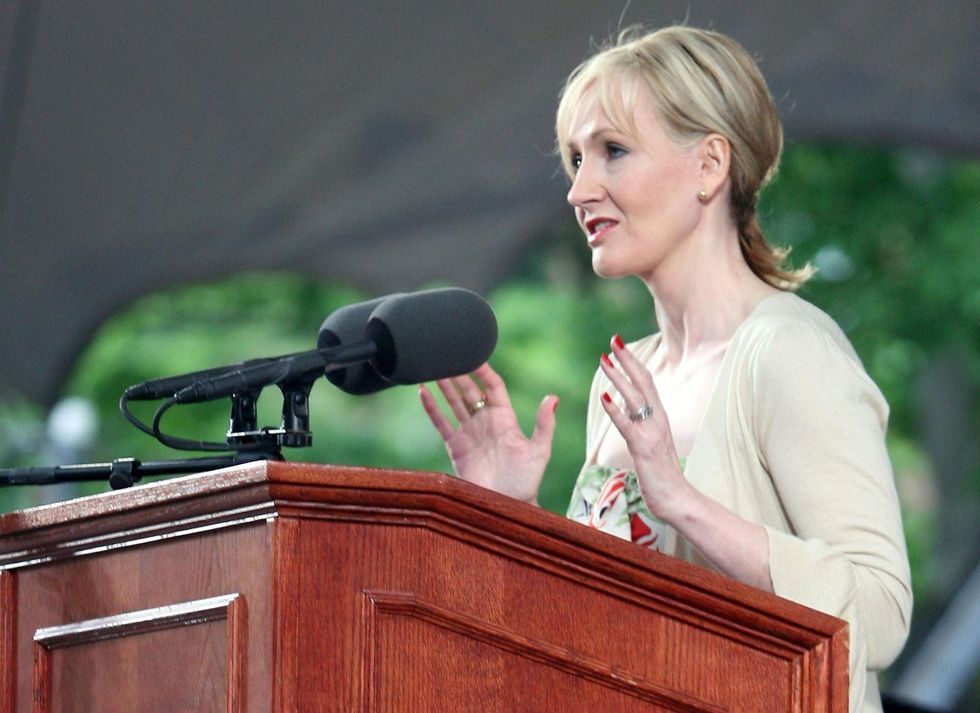 The Stoic Philosophy of JK Rowling

JK Rowling delivered the commencement speech at Harvard University in 2008.  Her address is remarkable for the powerful message it contains.

Through her dual themes of fear and imagination, Rowling echoes the philosophy of the stoics in her advice to Harvard graduates.  Ultimately, this speech is a plea to her audience to avoid the pitfalls of privilege and to use their human capability of imagination to make a life for themselves that really matters.

Throughout her career, JK Rowling has been criticised in the media for her apparent lack of warmth.  Her fans, of course, will be quick to jump to her defence, explaining that she is just shy.  Perhaps cognizant of her reputation, Rowling uses her first remarks to engender audience connection with humble humour and self-deprecation:

“The first thing I would like to say is thank you.  Not only has Harvard given me an extraordinary honour but the weeks of fear and nausea I have endured at the thought of giving this address have made me lose weight.”

A brief appeal to Ethos

Then an appeal to ethos, with the briefest not to her Harry Potter fans:

“Now all I have to do is take deep breaths, squint at the red banner and convince myself that I am at the largest Griffendor reunion.”

It is OK to be Nervous

So, we know Rowling is nervous delivering this address.  Who wouldn’t be?  But the reason that we know she is nervous is that she says so.  Once it is out in the open we see the signs of nerves – relying a little too much on her notes, faltering voice and protective stance.  Sometimes you don’t want your audience to be aware of your trepidation, so keep the admission to yourself.  In this case, her admission might well have been in the service of pathos.

Either way – it is ok to be nervous.  The fact that you have the jitters should not dissuade you from delivering a speech, especially if you have something important to say.  And JK Rowling goes on to prove that she has something very important to say.  A powerful message for the audience of Harvard grads, but for many other listeners across the globe.  Especially those with privilege and advantage.

The Stoic philosophers would advocate that we should define our fears and then face them, rather than attempting to live a life without fear.  In the words of Seneca; “a gem cannot be polished without friction, nor a man perfected without trials”.  Rowling identified her greatest fear as the fear of failure.  She goes on to recount that seven years after her university graduation she was, by any objective measure a failure.  She found herself divorced, unemployed, a single parent and quite poor.  In other words, her greatest fear had become a reality.

But in this quandary she found liberty.

At her lowest ebb, Rowling had no way of knowing how her story would play out.  The success she would achieve, at that stage, was merely a dream.  And yet, she had this to say about how failure served her:

“Failure meant the stripping away of the essential.  I stopped pretending to myself that I was anything other than what I was and began to direct all my energy at the only work that ever mattered to me.

Had I ever succeeded at anything else I might never have found the determination to succeed in the one arena where I felt I truly belonged.”

I was set free.  Because my greatest fear had been realised and I was still alive.”

And then, Rowling’s own interpretation stoicism, enchanted with her powers of metaphor:

“Rockbottom became the solid foundation on which I built my life”.

Theme 2: The Importance of Imagination

The second and primary theme of this speech is the importance of human imagination.  JK Rowling has an original take on this subject.  Essentially her argument is that only humans have the capacity to appreciate the situation of others, or as she puts it “they can think themselves into other people’s places.”  And it is our duty to use this power, coupled with our privilege to make the world a better place.

The enemies of progress are the ‘willfully unimaginative’ because we could all fall into the trap where we ‘refuse to hear screams or peer into cages’.

I find her message as profound as any from Epictetus or Marcus Aurelius when she says:

“What is more, those who choose not to empathise enable real monsters.  For without ever commiting an act of outright evil ourselves we collude with it thorugh our own apathy.”

“We have the power to imagine better.”

After delivering such a heady message, complete with a quote from Seneca, Rowling skillfully releases the pressure with a joke.  She praises her former classmates for not suing her in using their names as death eaters.  Thus she provokes the expected round of chuckles.  But his is more than a joke for the sake of humour.  Rowling is aware that she needs to deliver these young graduates back to the state of mind appropriate for the celebrations that will ensue.

I admire the subtle recognition of emotional intelligence.  And this from a celebrity so often accused of being unemotional.

My loyalties are with the Potterheads.  Nevermore so than having analysed this admirable speech.